E-waste, discarded computers and electronic goods, is among the fastest-growing type of waste in the world. It is predicted that e-waste is likely to reach 40 million tonnes a year or enough to fill a line of garbage trucks stretching half way around the world.

1800EWASTE, www.ewaste.com.au, has been established to specifically target the massive and growing problem of e-waste in Australia. E-waste, is growing three times faster than regular waste as Australians regularly upgrade their products with new models according to the Australian Bureau of Statistics (ABS).

The ABS estimates Australians will have discarded or stockpiled a total of nine million computers, five million printers and two million scanners within the next two years.
Brothers James, Geordie and Hamish Gill, who successfully established national waste removal company 1300RUBBISH in 1989 and then expanded it all across Australia, have now launched a separate company to deal with the massive issue of e-waste.

Hamish Gill says that it was apparent e-waste has become a major and fast growing issue requiring expert resources “We’ve been working in waste collection for about 18 years and have seen the build up of e-waste so it was a logical decision for us to establish a specialist e-waste company. We are utilising our experience and expertise with 1800EWASTE” says Hamish.

Australians buy more than 2.4 million new computers each year. Computers harbour a number of toxic chemicals that can be hazardous if dumped in landfill. For example, PC monitors can carry Cathode Ray Tubes (CRT) that contain about 20 per cent lead. The same CRT’s are also found in old style televisions and with the advent of high definition television, a surplus of unwanted old style TV’s is likely to mount up.

Australia is one of the few developed countries that still allows e-waste to be dumped in landfill. This is broken up and, over time, leaches out into groundwater, contaminating soil and waterways.

“We are genuinely concerned about this issue and how it can affect future Australians, it’s a grave concern which we simply can not afford to ignore any longer. It is crucial that e-waste is efficiently collected and recycled or else the implications will be enormous’ says Hamish.

All the electronic waste collected by 1800EWASTE is taken to recycling depots where it is recycled. The level of recycling that is achieved is 98 per cent by weight diverted from landfill. A certificate can be organised for items 1800EWASTE remove for their customers. 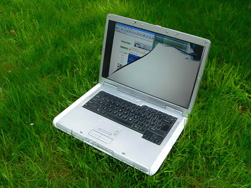