Why Australia needs to be aware of the right and wrong way to recycle their electronic waste.

Why Australia needs to be aware of the right and wrong way to recycle their electronic waste. 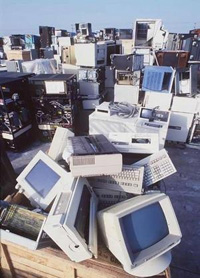 According to the Basel Convention on the Control of Transboundary Movements of Hazardous Wastes and their Disposal, the exportation of electronic waste to developing countries is illegal. 92 Countries around the world have ratified the Basel Convention, agreeing not to export their ewaste without the appropriate licenses in place.

However, a Greenpeace report states that after “inspections of 18 European seaports in 2005, as much as 47% of waste destined for export, including ewaste, were illegal.” The practise of exporting electronic waste therefore, is clearly continuing despite the regulations of the Basel Convention, and it’s not just the law that this illegal trade is damaging.

A report by the Basel Action Network looked into the detrimental health effects of ewaste recycling in developing countries and found that the “operations found in China, India and Pakistan are extremely polluting and likely to be very damaging to human health”. The lack of health and safety regulations in these countries mean that “open burning of plastic waste, exposure to toxic solders, river dumping of acids and wide spread dumping” are to blame for the contamination of air, soil and water supplies that cause such horrific health issues.

An article in ScienceDaily discusses the potential health risks posed by the vast amount of old computers, televisions, white goods and other electronic items that are exported to China. According to a study by MH Wong, “Chinese recycling methods significantly increase dioxin levels in women and their breast-fed infants”. The western world’s obsession with constantly updating our electronics, without a second thought for what happens to their old appliances, is seriously damaging innocent civilians in developing countries.

Dioxins are compounds that are closely linked to cancer and developmental defects – not exactly what you’d like to pass on to your off spring. The study compared the dioxin levels of women who lived around a recycling site, with those from an area with no electronic waste recycling sites near them and found that they had ”significantly higher levels of dioxins”.

The study concluded that the dioxin levels at recycling sites were at least 25 times higher than the tolerable daily limits, as set by the World Health Organisation.

How can we do more to ensure that our computers, televisions and other electronic appliances don’t end up being recycling in this way?

Wong’s study also found that there was “elevated concentrations of toxic metals in China’s ewaste recycling workshops”, due to their lack of health and safety and recycling compliance laws.  This makes it even more crucial to ensure that we do the best we can to ensure that our electronic waste is not recycled in countries where workers and civilians are subject to such damaging toxins.

At 1800Ewaste, we receive plenty of phone calls and emails asking us if we’d like to sell the electronic waste that we collect, but we answer with a very firm “NO” every time. We promise our customers that all of the electronics that we collect are recycled right here in Australia in ISO 14001 approved facilities. We never pass on or sell your electronic waste so you can be sure that it’s being disposed of in an environmentally sound way.