Monitoring the effects of our obsolete CRT monitors

Monitoring the effects of our obsolete CRT monitors 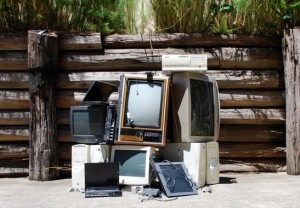 CRTs, or cathode ray tubes as they’re formerly known, make up the inside of old style television sets and computer monitors. That hefty looking thing in the attic taking up most of the space? That’s probably your old analogue CRT television . A CRT is a vacuum tube that contains an electron gun and florescent screen used to view images. The face of a CRT is usually made up of a thick lead to protect its delicate interior and block the harmful X-Ray emissions from the viewer.

With the boom in technological advances over recent years, the CRT is fast becoming a thing of the past. Replacing it faster than you can say ‘What’s on the box?’ is the new generation of televisions and computer screens – LED, LCD, HD, 3D are all fighting over top spot. CRTs no longer make the cut.

However, CRT monitors are typically considered one of the hardest types of waste to recycle and a worryingly high amount of CRTs are often left out on the street or sent to landfill. The worrying truth, however, means that for every CRT we dump, we’re also pouring an alarming amount of hazardous waste into our environment.

Add to this the contamination of barium and phosphorous that CRT monitors also contain,  when we throw away a CRT monitor, we’re actually throwing away a box of highly toxic, poisonous chemicals.

Monitor the effects of your CRT waste with 1800Ewaste

Due to their size and weight, CRT monitors often appeal to electronic waste exporters and fake recyclers for the metals and plastic they contain. You may even find a company that offers to buy your CRT monitors from you. This is wrong.

Exporting electronic waste is illegal, and is often sent to recycling centres in developing centres with little or no health and safety policies. Here, CRTs are stripped of their valuable materials and then burnt, releasing harmful chemicals directly into the air.

Using a company like 1800Ewaste however, guarantees that your electronic waste is recycled right here in Australia, using ISO140001 approved recycling facilities. 95-98% of your electronic waste, by weight, is recycled. All it takes is one quick and easy phone call to 1800 392 783 (freetoll) where one of our friendly customer service team are willing and ready to provide you with an obligation free quote.