Is Australia lagging behind when it comes to ewaste legislation?

Is Australia lagging behind when it comes to ewaste legislation?

In a world where we update our technology almost as often as we change out socks, you’d think that getting rid of ewaste would be getting easier. But it seems that, in Australia, we’re falling behind in our race against ewaste. The Australian government published a fact sheet on their National Waste Policy that stated that “waste generation has continued to grow and our increased efforts at recycling and reuse are not keeping up”. However, if you’ve ever struggled to get rid of your electronic waste, you’ll understand us when we question what “increased efforts” the government is talking about here. 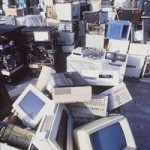 Computer recycling in an age of excess electronic waste

It seems impossible to even give away our electronic waste these days, as people no longer want to load themselves down with analogue televisions that are soon to be useless (without a set top box – another piece of future ewaste) or old computers that may or may not be riddled with virus’. Many local councils now refuse to accept electronic waste at their landfills and won’t collect them during hard rubbish pick ups, but few are giving their residents alternative options.

Electronic waste has been on the government’s radar since the early 1990’s but there still seems to be little constructive legislation in place to govern the ever growing problem.

As highlighted by the National Waste Policy, hazardous waste doubled in size from 0.68 million tonnes to 1.19 million tonnes between 2003 and 2007. We’re now in 2010 and the age of the digital switch over – we don’t even want to consider what will happen to this figure over the next few years.

Product Stewardship Australia – a break through in Australian ewaste legislation, but how long until we see the benefits?

Product Stewardship Australia is possibly one of the post constructive solutions towards electronic waste in Australia. In 2008, John Gertsakis, executive officer of the PSA , spoke to The Advertiser and stated that “there was no clarity of vision from the Australian Government about what it wants to do about Ewaste” which is why the PSA had to take the initiative.

The Product Stewardship Scheme proposes ideas on dealing with electronic waste by passing the responsibility of recycling back to the manufacturer, and already has support from leading electronics companies such as Sharp, Panasonic and Sanyo.

The scheme addresses televisions and computers and suggests that a tax is added to all televisions imported into Australia, which would then cover the cost of recycling once the item becomes obsolete. Environmental ministers agreed to the Product Stewardship scheme in November 2009, with hopes to have it up and running by 2011. However, with 17 million televisions, computers and other electronic waste being thrown into landfill every year, is this too little, too late?

Electronic waste policies around the world certainly highlight how behind we are as a country.

Several states in Canada have already adopted a similar type of recycling scheme, where the cost of recycling the item is included in the purchase price – the first of these being Alberta back in 2004. In Switzerland, they’ve been able to return all electronic waste to their place of purchase since 2005 and in the European Union, Taiwan, South Korea and Japan responsibility of recycling is already that of the manufacturers under a law that requires them to recycle 75% of the e waste they produce. Yet, in Australia, our government is allowing our electronic waste to pile up while they scratch their heads trying to decide what to do.

So while we wait for our government to figure it all out, you can call 1800Ewaste and responsibly recycle your electronic waste today.

1800Ewaste is Australia’s leading ewaste collection and recycling service and we’re passionate about diverting as much electronic equipment from landfill as possible. We believe in prolonging the lifespan of valuable materials by recycling all that we can. All of the electronic waste that we collect is recycled within Australia at ISO14001 accredited facilities. The cost of our service covers not just the collection of your electronic waste from your office or home, but also the cost of recycling too; it’s a labour intensive process where all of your ewaste is broken down and stripped right down to its core components in safe and secure recycling facilities.

Currently 95-98%, by weight, of all the materials we collect is recycled for future use. Our service is professional, fast and reliable; we’ll come to you, collect your electronic waste and deliver it to the appropriate recycling facility. Call us today on 1800 392 783 for an obligation free quote and find out how we can help you recycle your electronic waste.