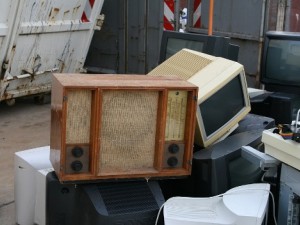 Generally speaking, ewaste, compared to regular household waste, is produced at a greater rate of up to three times higher. Majority of such waste is said to be produced by commercial means.

Apart from computers and monitors, ewaste such as batteries, tubes and globes and fluorescent lamps can be really harmful to humans and to the environment when they are discarded. With that being said, it is therefore obvious that the improper dumping of ewaste is not only illegal but is also a health hazard.

Chromium is traditionally used in magnetized recording products such as VHS tapes and audio cassettes. In the environment, you can find the element chromium in volcanic particles, sediments, rocks, flora and fauna. Similar to other metals, there are two predominant valence states found in chromium known as III and VI. It is chromium VI which poses a health hazard to most organisms while chromium III is said to be an important part of our diet.

Chromium along with its oxides are popularly used for their anti-corrosive quality and high conductivity. The presence of chromium VI in the body delivers various toxic effects in the human cells. This can lead to irritation in the eyes, mucous membranes and the skin. When there’s chronic exposure to chromium VI, it can lead to permanent damages to the eyes as well as DNA damage.

Dioxins are more popularly known as environmental pollutants. They are among the so-called “dirty dozen” which pertains to a group of dangerous chemicals otherwise known as POPs (persistent organic pollutants).

In the short-term, exposure to high levels of dioxins can lead to skin lesions. These include altered liver function, dark skin patches and chloracne. Long-term dioxins exposure is usually associated with the impairment of various body systems such as the nervous system, immune system, endocrine system as well as reproductive functions.

Depending on your location and on the quantity of your ewaste, our team at 1800Ewaste can offer various collection options that are suitable to your preferences. Some of the ewaste items that we can collect include computers, monitors, mobile phones, cables, faxes, scanners and video/DVD players.

We provide fast, reliable and efficient ewaste anti-contamination and disposal service while aiming to support the local campaign in saving the environment. This is because we deliver the collected ewaste to accredited recycling centers. Here, 95 to 98 percent of ewaste, by weight, is recycled and therefore can be used again for a new purpose.

We only use ewaste recycling centers that are governed by ISO14001 standards which is the globally known standard for the environment. After launching our ewaste collection services 3 years ago, 1800Ewaste has successfully recycled over 280 tonnes of ewaste. We are committed to uphold the highest standards in ewaste recycling and we are dedicated in working with residential and corporate locations in Brisbane.

Call us now at 1800Ewaste (1800 392 783) and get a non-obligation quote from our friendly customer service team. You can also opt to provide your contact details by using our online form.